For Africans and African Americans, attention to hairstyles and manipulation of hair represent a cultural richness and a deep, abiding trust among people.

During recent visits to his native Ghana, Rexford Ahene found and acquired a piece of art that depicts African hair culture and had it shipped over the summer to Lafayette College for permanent display in the Portlock Black Cultural Center. 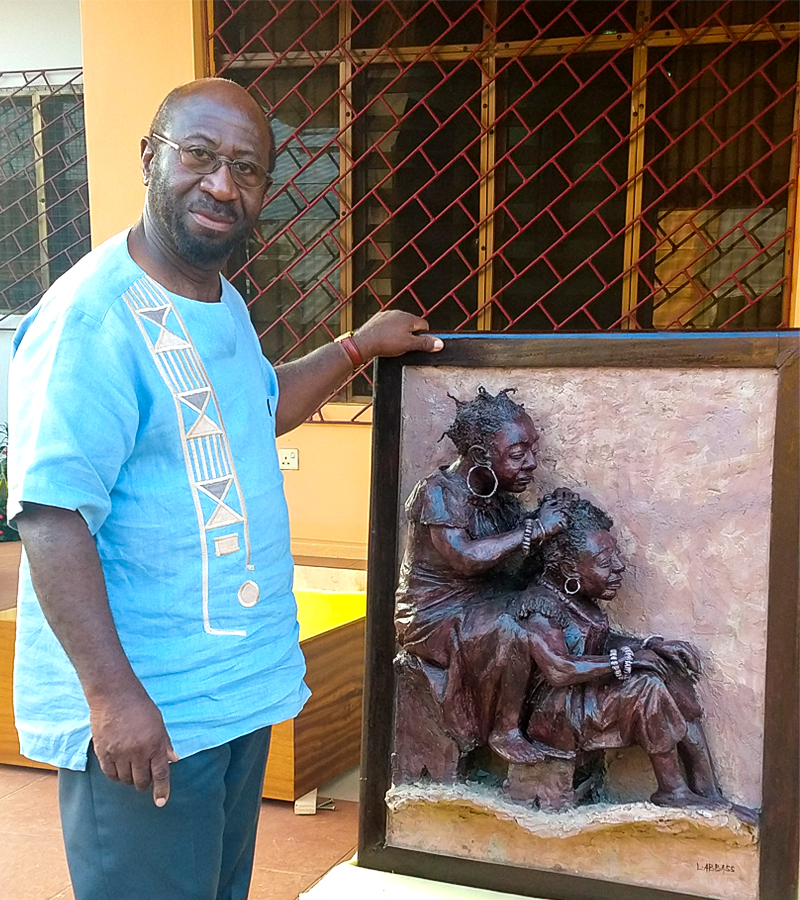 Rexford Ahene, retired professor of economics, poses with The Hairdresser in Ghana before shipping it to Lafayette’s campus to display in the new Portlock Black Cultural Center.

A bas relief sculpted from fiberglass, called The Hairdresser, it’s by Abbass Lateef, a Ghana-based professional creative artist, painter, and sculptor who creates objects out of materials such as stone and wood. Abbas has developed a technique called the Pox Technique.

“My sculptures are three-dimensional artworks which are physically presented in the dimensions of height, width, and depth, and in forms that can be hung on the wall,” he says, describing his style as swirling between abstraction and realism.

Ahene, who retired in spring after 40 years serving as a professor of economics, describes the artwork as “very, very intimate, a symbol of identity.”

“It’s also a symbol of intimacy and security for somebody to really play with your hair for hours, you know, massaging your head,” he says. “You don’t allow everybody to do that. So, it represents a very close connection between mothers and daughters, in addition to the bonding within the family that comes with that.”

In African and African American cultures, complex hairstyles and body decorations were and still remain a way to express identity. Braiding patterns and hairstyles are used in Africa as an indication of a person’s ethnicity, age, marital status, and also symbolize one’s family background, social status, and spiritual strength.

For example, the Afro hairstyle popularized during the Civil Rights era in the 1960s remains a powerful symbol of Black pride and a link to Western and Central African roots. Dreadlocks, which represent a constant spiritual reminder and devotion to purity, were worn as early as 500 BCE by Ethiopian Coptic Orthodox priests in Ethiopia and are still worn proudly by African Americans today, just as they are throughout Africa, and prominently in the countries of Djibouti, Eritrea, Ethiopia, and Somalia. The Hairdresser sculpture epitomizes this long-held tradition, Ahene says.

“When I saw that piece, it seemed so symbolic of the Black identity, Black hierarchy, Black culture, and the intimacy that a cultural center on campus is supposed to provide for students,” he says. “That resonated so much that I thought we have to have this.”

Because this tradition continues, Ahene recognized that the artwork would be appropriate for the new Portlock Center, which opened to students this semester. Last summer, Lafayette College successfully moved a stone home from 517 Clinton Terrace to its new location a block away at 41 McCartney St., where it underwent renovations as the new Portlock Black Cultural Center.

He was also a driving force behind the creation of the Office for Intercultural Affairs, the Africana studies program, and the Interim Program/Study Abroad in Africa. He also created the College’s dean for multicultural affairs and diversity issues position, helped found the Black Coalition, an informal affinity group established to make Lafayette College a more welcoming place to work and learn, in 1994, and worked to recruit Black faculty through the creation of the Faculty Diversity Committee in 1983.

On the international front, Ahene served as a policy adviser to many national governments, multilateral development institutions, academic institutions, and think tanks on how restructuring property and economic rights can enable markets and free enterprise to redress the ill effects of colonialism and underdevelopment, especially in post-colonial countries throughout Africa.

He is the principal architect and author of land policies in Tanzania and Malawi, and the senior land policy adviser for Uganda and Liberia. Since 2006, Ahene has served as the senior technical adviser for designing and implementing digital land information systems for land administration reforms in Sub-Saharan Africa, work that has changed and improved lives.

By Wendy Wilson-Fall
Associate professor and chair of Africana studies

Hair care and decoration are important elements in African and African descendent self-care, intimacy, and social relations. From Madagascar in the Indian Ocean to Senegal and Guinea on the Atlantic, hairstyles and the process of hairdressing are important parts of social life. In terms of style, hair may signal ethnicity, class, or even wealth, as some styles are very expensive and in pre-colonial times included coins, silver, or gold. In terms of hair coiffure, or the preparation and styling, these are moments of social interaction, whether between a brother and his sister, or between female friends or women of different ages.

Ahene’s most recent work has involved finalizing the primary policy on land and natural resources in Sierra Leone, and bringing the principles of participatory democracy and public policy to that country while helping to alleviate poverty and improve food security.

As a result of his work, for the first time in Sierra Leone, families in more than 60 communities were able to receive their cadastral maps showing the actual land size and harmonized boundaries in four districts of Sierra Leone.