How David N. Miller ’93 climbed the ranks from a ROTC student at Lafayette to a two-star major general in the United States Space Force

“In any circumstance, you get out of life what you put into it.” It’s a lesson David N. Miller Jr. ’93 first learned when he arrived at Lafayette College in 1989 as an 18-year-old unsure of what the future held for him, and it’s a lesson he still carries with him today as a two-star major general in the United States Space Force. 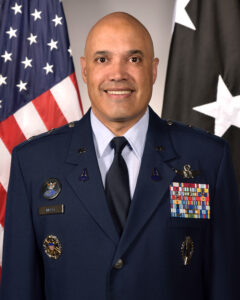 Miller’s illustrious military career is certainly a testament to the heart and hard work he’s poured into it. Over the last 28 years, Miller dedicated every fiber of his being to serving his country in the United States Armed Forces, working his way up the ranks from an ROTC student at Lafayette, to a second lieutenant in the Air Force, and all the way up to a highly decorated director of operations, training, and force development of the United States Space Command.

In his current role, Miller is responsible for deterring conflict, defending U.S. and allied freedom of action in the space area of operations, delivering combat-relevant space capability to the joint/combined force, and developing joint military forces to advance U.S. and allied interests in, through, and from the space domain.

“My main purpose is to ensure that U.S. Space Command forces are ready for the day-to-day missions that we are assigned, and postured to deter hostile action and respond to crises with a credible force that can fight and win if needed,” Miller says. “We have an Air Force component, a Navy component, an Army component, a Marine component, and a Space Force component, and every day I work with military commanders and their staffs to synchronize their operations and activities—whether it’s human capital or weapons systems—in order to support our joint forces, all of which depend on space in order to see, shoot, maneuver, and communicate over the horizon.”

In addition to the noble tasks of defending the United States Constitution, enhancing security for U.S. citizens, and protecting the values that allow Americans to be Americans, one of the most rewarding parts of his job, Miller explains, is helping to make sure the next generation of military professionals has the tools and resources needed to succeed.

“I’ve been on active duty since a month after I graduated from Lafayette, and every year for the last 28 years I get more and more impressed with the talent that America’s mothers and fathers have loaned us in their sons and daughters. They asked us to do nothing more than help make them achieve their personal and professional potential in the defense of this republic,” Miller says. “So, I get to work with the best people that America has to offer. What gets me excited every day is getting to see people who are new to the military, who might not have thought they had the power or capability to execute a complicated mission or task, and then I watch them achieve heights beyond what they ever could have expected. That is the hidden secret of America’s military that our adversaries cannot match. The power of a team, driven in purpose, and unleashed to innovate beyond their wildest dreams … and I have seen it countless times in my career.”

Miller’s passion for helping others realize their full potential was awakened when he was a student at Lafayette, where the support he received from the College and its community, he says, set him on the path to fulfilling his own dreams.

While Miller had been accepted to several different colleges, he ultimately chose Lafayette because not only was his sister studying there, but the financial aid package offered to him by the College was second to none. “As the son of a single mom who was a New York City school teacher, there were real financial choices we had to make in order for me to go to college,” Miller says, “and thankfully Lafayette was able to put together a package we could live with.”

While he knew he had an interest in the military, the young Miller wasn’t entirely sure what he wanted to study at Lafayette. At first, he tinkered with the idea of pursuing a degree in civil engineering, political science, or even business. But when Miller found himself in an anthropology course with emeritus professor Susan Niles during his first year, his future started shifting into focus.

“I found the study of anthropology and sociology to be compelling,” Miller says. “It offered me a view into the best potential that America has, and the power of community, and I appreciated having great professors who opened my eyes to the difference you can make in people’s lives if you provide them with the right surroundings and the right support.”

Though Miller, a native New Yorker, was discouraged by the lack of diversity on Lafayette’s campus during his first year, he chose to not let it get in the way of his seizing the unique opportunities the College offered to its students. “I knew I wasn’t giving Lafayette the chance it deserved,” Miller says. He soon became a member of the Association of Black Collegians and took part in other extracurricular activities like tutoring, intramurals, and volunteer work.

“I also knew I wanted to travel and learn more about myself. So, I reached out to Susan Blake [professor of English and department head] and said, ‘I know your study abroad program is meant for juniors, but is there any chance I could go as a sophomore?’ And she said, ‘We have another seat, sure.’ It was one of those moments I realized you get out of any situation what you put into it. I studied abroad in London for six months, and I met some phenomenal people, some who were Lafayette students, some who were from other schools, and quite a few Brits. And when I got back, I gave Lafayette a chance that I hadn’t given it. I, too, was more focused and mature, and my academic experience was more rich and fruitful.”

While abroad, Miller decided to reach out to the Lehigh USAF ROTC Detachment to see what opportunities were available to join the cadet corps in his junior year. While studying abroad, he realized graduation was just two short years away, and he did not yet have definitive options for a job. Because the end of the enlistment period was quickly drawing near, Miller hoped he wasn’t too late.

“The military was steady work I knew I could do; I always had an interest in serving. Moreover, I knew I’d be able to get a master’s degree, so joining the Air Force ROTC program knocked out three or four birds with one stone,” Miller says. “They said if I could get a physical that week, they could enroll me in a summer field training program, and I could start my junior year. So, they pointed me to the U.S. military base at Royal Air Force Lakenheath in Suffolk, and from then on, I saw a team of people who were willing to help. Whether it was the security forces manning the gate, or the technician at the military hospital who helped me take care of the physical in one day, I saw people who were ready to roll up their sleeves versus wringing their hands. And that’s exactly what I try to do for the people I serve with today.”

From there on out, Miller built a storied career serving in the United States Armed Forces, gaining operational experience across space power disciplines and holding a wide range of operational leadership and staff positions. He has earned master’s degrees in business administration, national security and strategic studies, airpower arts and science, and national security strategy, and has completed training at the U.S. Air Force Weapons School, Naval War College, National War College, and more.

Miller’s past experience includes operating intercontinental ballistic missiles for the Air Force Space Command; preparing for test and classified air and space launch operations on the West Coast; serving with the diplomatic corps in the State Department, all of the nation’s intelligence agencies, and even members of the Federal Bureau of Investigation, the Customs and Border Patrol, etc. He served in Iraq as a military liaison and adviser to the Iraqi security forces and the prime minister’s chief of staff to help rebuild their security forces and equip them against ISIS threats; and so much more. Miller has commanded airmen and guardians at the squadron, group, and wing levels, and most recently served as the assistant deputy chief of space operations for Operations, Cyber and Nuclear Headquarters, U.S. Space Force, at the Pentagon, in Arlington, Virginia.

“Above anything, I take a lot of pride in helping take care of my teammates and ensuring that they achieve their personal and professional potential,” Miller says. “I learned that from Lafayette, from select opportunities where people said ‘yes’ to me when I needed help, whether I knew I needed it or not.  Now, I try to do that for others. I set very high standards for myself and the people whom I serve with, but I will do anything I can to help them succeed. Service in the military has been a very rewarding experience for me, and I’m privileged to be a part of this team. As long as they’ll have me, I’m willing to keep showing up every day and giving this team the best that I have.

“If there is any nugget I would pass to other Lafayette students, whether they are thinking of a career of service or not, it is just that: Give your team the best you can each and every day, and when one of them needs help, you say ‘yes’ and stand up and be counted. Trust me, there will be many days when you need a helping hand, so make it a priority to pay it forward.”