Among them was Swing era bandleader and singer Cab Calloway, who grew up in a rowhouse on Druid Hill Avenue. Like many other musicians of his era, he played in social clubs, hotels, and venues like the Royal Theatre on Old West Baltimore’s Pennsylvania Avenue.

West Baltimore fell into a steep decline in the 1960s, only to regain an unwanted national spotlight during the protests that followed Freddie Gray’s death while in the custody of police in 2015.

Now the community is seeking to pull itself out of its decay by rediscovering itself as a center for the arts and tapping into that cultural identity as a bedrock for an economic revival. 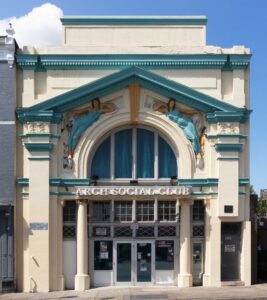 At the invitation of the Arch Social Club of Baltimore, one of the oldest African American social clubs in the nation, Gladstone “Fluney” Hutchinson, associate professor of economics and policy studies and founder of Lafayette’s Economic Empowerment and Global Learning Project (EEGLP), is co-leading a multiyear collaborative co-learning effort aimed at bringing social and economic redress to West Baltimore communities.

This collaboration will involve Lafayette faculty and students partnering with diversely experienced West Baltimore stakeholders in developing recommendations to transform communities into places of economic prosperity and community wealth and improve their well-being. Particular focus will be given to awakening West Baltimore latent assets, including cultural and creative ones, and the community’s deeper and more meaningful engagement with the value and wealth-building dimensions of entrepreneurial capitalism.

Since its founding in 2007, EEGLP, which brings together faculty, students, and alumni from varied disciplines, has helped reestablish business entrepreneurship in Appalachia, Honduras, and Jamaica, as well as in New Orleans after the damage caused by Hurricane Katrina.

“West Baltimore is going through the reimagining process about what its arts and cultural environment means for the Black community today,” Hutchinson says.

Supported by its status as a federal Opportunity Zone, which provides tax incentives for private investments, West Baltimore is poised to rebuild free markets and capitalism as a path to prosperity and community development. 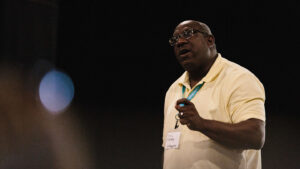 “The first year is dedicated to having the community discourse about the conception of its imagining of its future,” Hutchinson says. “The second year will focus on building the foundation and pillars for the conception and figuring out the possible roles of the government, the private sector and the community in facilitating its development. The third year will conclude with the building and presenting of a strategic development plan.”

In the project statement, Hutchinson and Ute Schumacher, visiting professor of economics, write that “our project holds as first principle in community reimagining and redevelopment the importance of the sequential strengthening of trust, first within and then across stakeholder groups, as early-stage investment in cooperation.

“This condition is particularly germane in Baltimore City and West Baltimore where chronic poverty and distress, fueled in large part by the city’s history of harmful and welfare-reducing institutional racial discrimination, remain a central feature of social and economic life.

“The deadweight of this legacy now fuels a trust deficit among and between stakeholder groups in West Baltimore’s redevelopment aspirations, including residents, communities, government, organizations, and the private sector.

“We further believe that redressing this trust deficit is a necessary condition to incentivizing among stakeholders social capital building, cooperation in pursuit of shared and overlapping goals, and community agency and ownership of the redevelopment process, goals, and outcomes.”

Value driven in history, place, culture, and belonging, the Arch Social Community Network agreed to partner with the EEGLP framework because it is value-driven work, focusing on people, place, and culture with an influence in economics that supports aspirations.

“These values are our foundation and building blocks for future cultural bearers to carry the work forward in time; as have the historic Arch Social Club,” says Denise Griffin Johnson, executive director of the Arch Social Community Network. “Additionally, one of our mantras is remembrance, healing, and celebration. The EEGLP framework brings a new set of knowledge that we feel is necessary to learn to support our aspirations, to influence the economic development of West Baltimore.”

Johnson predicts that the West Baltimore Re-Imagining Culture and Economics Project will increase community knowledge and support the historical cultural history of place while also building upon the creation of the first African American Arts and Entertainment District in Baltimore.

The project will return West Baltimore back into its rightful place in American history, she notes. 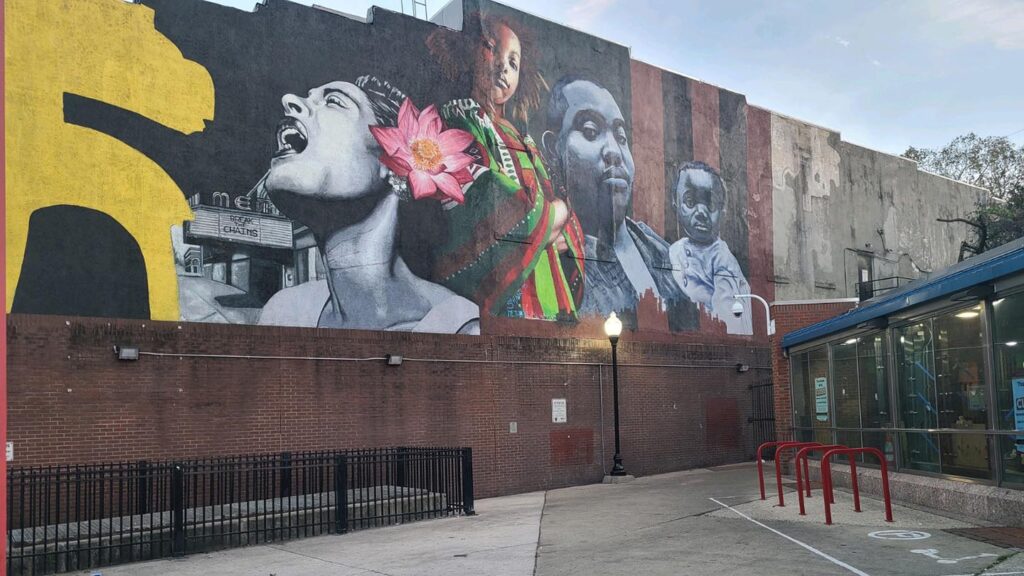 A mural at Pennsylvania and North avenues in West Baltimore.

“Growing up in West Baltimore, Pennsylvania Avenue was our cultural district and place for famous African Americans to perform and participate in many art forms,” Johnson says. “The partnership will support the intersection of this creation with a fuller focus on West Baltimore through the lens of culture and economics, building place and vibrancy.”

So far, the project is moving forward with consistent effort and alignment.

The Arch Social Community Network has identified the leadership Council for the Work, and local colleges and universities, including Coppin State University, University of Maryland, Baltimore County, Maryland Institute of the Creative Arts, and Morgan University, a historically Black university, have agreed to work in partnership with the Arch network and EEGLP to support the planning and execution of the work. The council is building its social network and completed its first full exchange through a story circle format.

“Our local senator and city council person are becoming knowledgeable about the work,” Johnson says, adding that the project leaders have met and talked with the EEGLP at Lafayette College, and have had the opportunity to gain some knowledge as to how arts districts are set up and the importance of “arts vibrancy” in developing its strategy.

Hutchinson shares the optimism that the project, supported by Maryland’s Lt. Gov. Boyd Rutherford and community leaders such as Calloway’s grandson, will succeed. 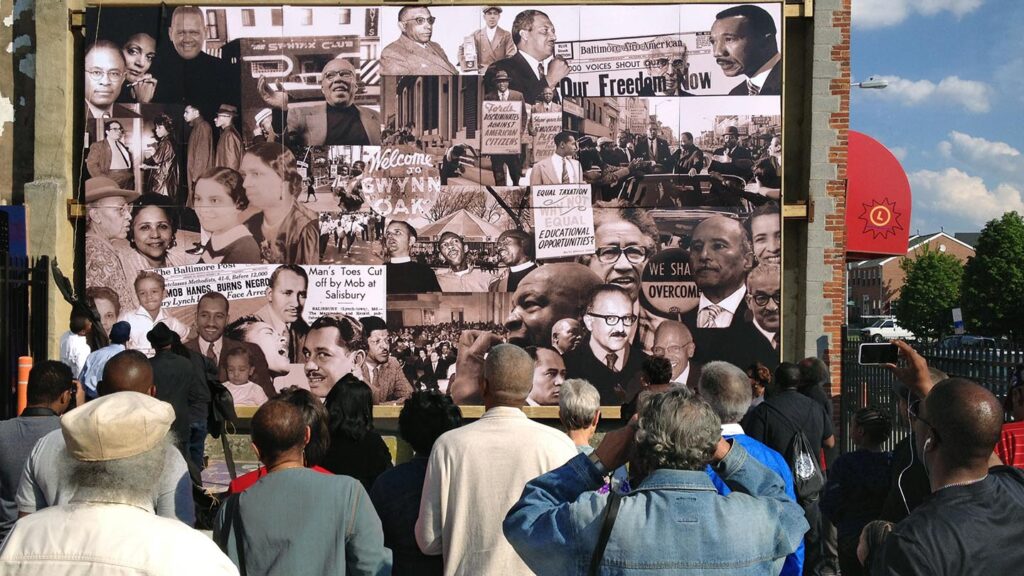 “So the work in Baltimore now is one where they’re really excited about wanting to partner; they’re really looking forward to it,” he says. “Right now, motivation is the most valuable asset. We collaborated with the community partners in developing a project statement, and our student team gave an outstanding presentation on the distinct EEGLP-calibrated paradigm for the project.”

Both activities brought greater clarity to the community on the EEGLP philosophy and how it could be utilized in a collaborative process to advance the community’s economic development aspirations.

One result was community stakeholders viewing the collaboration between EEGLP and themselves as a platform on which groups that had not worked cooperatively on community affairs in years could now engage each other on shared goals with a common understanding and with greater trust.

“Now meetings are occurring more frequently to discuss and design how the important shared goals will be pursued,” Hutchinson says.

Ever the mentor, Hutchinson engaged one of his former students, Reco Collins ’05 (economics and business), to assist with the project.

“This is a very promising project, because the Pennsylvania Avenue corridor of Baltimore City was one of the most prominent African American cultural districts in the country during its day,” says Collins, senior vice president of public finance at PNC Bank in Baltimore.

“There’s an opportunity for this project to receive a lot of fanfare in West Baltimore,” says Collins, who envisions retail and restaurants emerging among the solid brownstones, brick row homes, grand mansions, and historic churches.

“This project will give a very clear vision and plan for West Baltimore, which will attract a lot of investment and create opportunities,” he adds. “We’re literally on the cusp of getting everything that you need to revitalize this community.”

“As a member of the EEGLP team, I learned that in order to assist in building a stable and economically prosperous community in West Baltimore one must understand the cultural and historical significance of the community,” says Ednetta Fullmore ’23 (anthropology and sociology, Africana Studies minor).

“In my opinion, West Baltimore is extremely unique, and Pennsylvania Avenue itself is the epitome of Black cultural richness,” Fullmore says. “To maintain a thriving arts scene in West Baltimore, a deep economic impact analysis incorporating community members’ artistic interests is necessary.”

The research methodology that has been crafted for the development in West Baltimore represents a new paradigm of analysis, as not only instrumental factors but intrinsic ones as well are considered, notes Shaan Shuster ’23 (economics major, with a certificate in finance, Chinese minor).

“In my time with EEGLP, the vast importance of blending these avenues of analysis has stood out to me as I have learned how private incentives between community organizations can overlap with the good of the commons,” Shuster says. “West Baltimore has historically been home to a diverse ecosystem of talent in arts and entertainment; our role is to intertwine these strengths with the development goals of the entire community, in turn renewing West Baltimore as a self-sustainable environment of economic and civic well-being.”

Khalid Al-Motaery ’23, who’s deciding between electrical and computer engineering and computer science, says that Hutchinson and Schumacher have helped him learn how to integrate his computer and data science skills into a space of interdisciplinary work.

“Specifically, I learned how to use technology to find smart ways of gathering and visualizing data. We aim to use social network analysis graphs to further understand the social capital in West Baltimore,” he says. “Identifying the social networks helps Baltimoreans to strengthen their relationships and economy.”

Embracing Libertarian values, which the Whitman endowment funds espouse, Hutchinson believes in removing government obstacles from people’s lives to allow them to create opportunities and freedoms.

“I want government to facilitate freedom in the same way that the government was the anchor for taking away people’s freedoms,” he says. “The community has to be strong to have that conversation with government.

“The project is really about renewing and modernizing the Marquis de Lafayette’s commitment to the propagation of positive freedom for people and communities throughout the Americas,” Hutchinson adds. 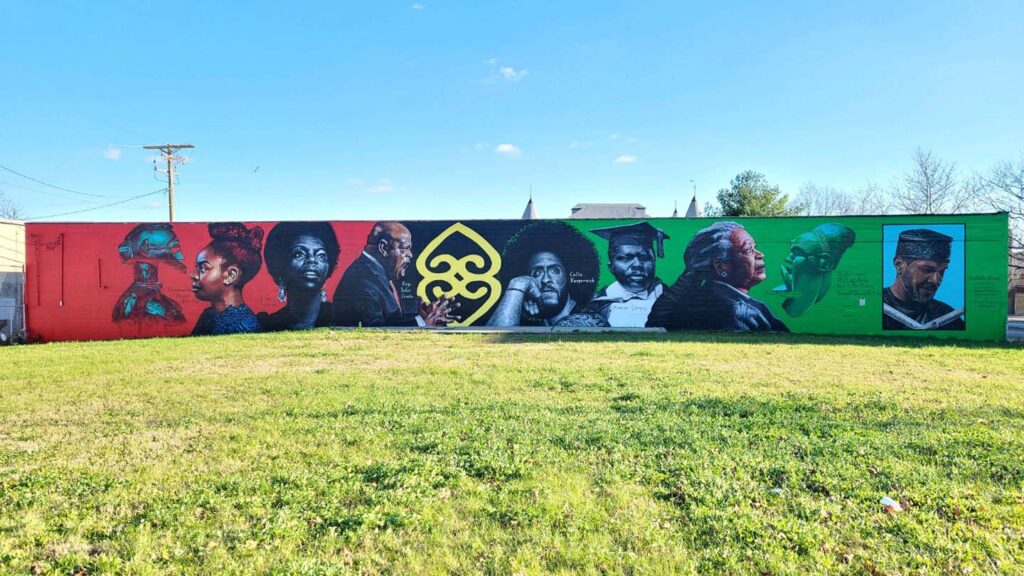 The Wall of Pride mural in West Baltimore by artist Ernest Shaw.

“It was in furtherance of the endearment of this timelessly important value for a just social living that the citizens of Easton founded Lafayette College, and Lafayette College’s collaboration through EEGLP with residents and communities in Baltimore, a city with a park and numerous roads names in his honor, seems most fitting, especially in the current and increasingly deep-rooting fractures and polarity in social, civic, and economic relations between Americans and across America,” he opines.

“I fully appreciate that there is great contestation out there on whether capitalism is the source of many of the world’s great evils, or the vehicle for the significant reduction in global poverty and the massive enhancement in peoples’ freedoms,” Hutchinson says.

“My experience as a development economist has convinced me that free-market entrepreneurial capitalism, especially when broad-based, inclusive, and allowing for diverse skills to create value within, is the fastest and most robust path for people to build economic and social wealth, and achieve their most desired and valued economic and community development,” he adds.

This, however, requires a resilient commitment by a society to rid itself of the systematic and perverse ways, Hutchinson says, adding, “it impedes its members from fully participating in and benefiting from engagements in mutually beneficial exchanges.

“This process of course begins and ends with citizens and communities having the freedom to choose whether and how they engage in participation in capitalist markets,” Hutchinson says. “What is good about this West Baltimore project is the confidence residents have in their ability to individually and collectively create value and wealth with their awakened assets through greater participation in free markets.”

Stakeholders in West Baltimore are poised to create new opportunities for freedom, he says.

“I’m pretty excited about the possibilities,” Hutchinson says. “West Baltimoreans are determined to achieve the economic empowerment that will give them agency and ownership over valuable communities that they are proud to raise their families in and call home.”