When NYC Posse 6 first arrived on campus in fall 2007, the students treated their mentor, Javad Tavakoli, like a newly minted substitute teacher.

They showed up late for meetings, talked over the now emeritus professor of chemical and biomolecular engineering, and threw tubes of Blistex at each other.

“We were very challenging,” says Krysta Battersby ’11, academic administrator at New York University. “There were 12 of us, and we all had different personalities and different needs. It was hard coming from New York to Easton. We were loud and rowdy and not very appreciative of him.”

But Tavakoli, or JT as they nicknamed him, showed nothing but patience. He never yelled or said no when they wanted to reschedule a meeting. His computer mousepad sported a photo of the group, and his office provided refuge when life became overwhelming for any one of them.

“I have no idea what we did to make this man care about us so much,” says Washcarina Martinez Alonzo ’11, a lawyer with New York City Commission on Human Rights. “He’s literally an angel.”

And now he has a scholarship named for him.

“We wouldn’t be the people we are today without JT,” says Battersby, still the unofficial mother of the group seven years after its members graduated in May 2011. “We’re blessed to have him in our lives.”

Tavakoli, who retired after 29 years in 2015, learned of the fund during a surprise reception last month in Farinon Center. Martinez Alonzo lured him to campus under the pretense of attending an information session for incoming Posse students. But when he walked into the Buttery Room, he was greeted by nine members of his Posse and Arlina DeNardo, director of leadership initiatives and senior development officer.

“I remember when we selected this group, and it was so special, but I also think a Posse is a reflection of the mentor,” said DeNardo. “Each of these Posse members so much wanted to do this scholarship for you. Each time I got an email from one of them, it was so heartfelt.”

Tavakoli, who was rendered speechless at first by the generosity and thoughtfulness of the group, refused to take credit for the students’ success.

“Their efforts, their talents, their hard work are what brought them to where they are today,” said Tavakoli, characterized as having “the patience of a saint and the heart of a thug” by his Posse.

Martinez Alonzo spoke on behalf of the group. “Today is a reflection of some of the values you’ve instilled in each of us,” she said. “A lesson that we will forever keep. That some of us who met by chance can end up being loved like family, but more importantly, that strangers can eventually be a team like this Posse. You were the glue that held us together, and we hope that this fund reflects your light in each of us.” 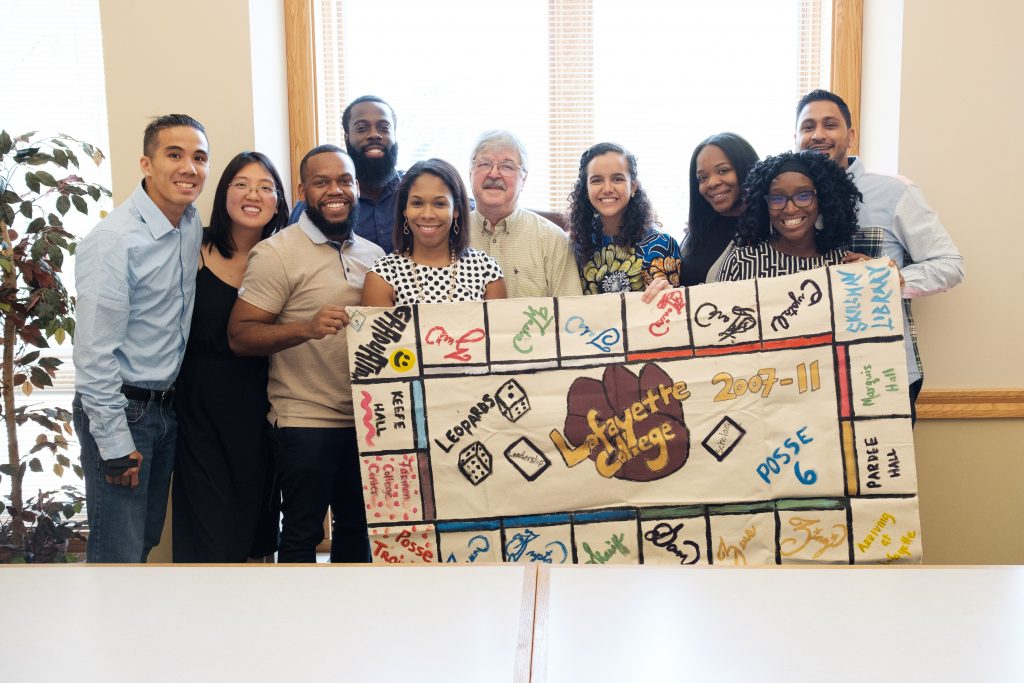