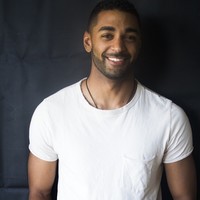 A content producer for New York’s HOT 97, Julian Delgado’s #MeToo moment came in April when he wrote a scathing op-ed for the radio station’s website lambasting the hip-hop industry for promoting artists who sexually abuse and degrade women.

“There is an acceptable norm within the hip-hop culture that allows flagrant abuse and money-making showmanship to walk hand-in-hand into the recording studio, on the tour bus, and out on the airwaves for millions of avid listeners,” Delgado ’15, who goes by Julian Nicholas, wrote in April after listeners began taking sides in a feud between rappers Cardi B. and Nicki Minaj.

“We’re tearing apart these female artists while at the same time making careers for guys who are animals to women,” says Delgado, who majored in English and film & media studies. “Labels are turning a blind eye because artists’ albums go platinum, and they want to make money.”

People were surprised that HOT 97, a popular home for Top 40 rap music, would shine attention on an issue historically ignored by the hip-hop community, but the column was well-received by listeners, says Delgado. “Just as music speaks for artists, I want the things I write to contribute to the cultural space. I’m not going to waste a lyric or miss something because someone told me it wasn’t appropriate. I’m going to write exactly how I feel.”

Music has long played an important role in the New York state native’s life. After graduating in December 2015, Delgado spent two years in Chicago with Teach For America, where he infused song lyrics into his middle school English curriculum. He got the idea while listening to a 2016 song by Anderson .Paak on the Red Line train after school one day. His class was reading The Watsons Go to Birmingham, which takes place in 1963 during the Civil Rights Movement, and a guest verse by Talib Kweli on the song “The Dream” references founders of the Black Panther party.

“This is the music you gotta feel
Gave you the truth before I got a deal
No rabbit in a hat
It ain’t no magic, ain’t no Copperfield
More like a panther, Huey Newton, Bobby Seale
Word to the free lunch, who knew what we would become?”

The next day Delgado shared the song in class. “I wanted to show them that this stuff is still relevant to our culture,” he says. “They thought it was cool.”

The two years he spent in Chicago were difficult, says Delgado, who earned a master’s degree in education attending night classes at Dominican University in Lake Forest, Ill., during that time. Even though he loved watching his students “grasp concepts and grow,” he discovered teaching wasn’t for him. A low point came when English Professor Bryan Washington passed in late December 2015. “I wanted to come home. I had a fair share of roadblocks at Lafayette. He was always in my corner,” says Delgado. “He gave me so many books. Everything he gave me I cherish.”

One of those books was his copy of Invisible Man. In memory of Washington, Delgado had the cover image tattooed on his right forearm.

When his commitment with Teach for America ended in May 2017, he decided to stay in Chicago and ended up couch surfing at another Lafayette graduate’s apartment. He spent his days attending concerts and music festivals, taking note of how the language of song was able to transcend cultures and differences. “It was fascinating,” he says. “I decided I wanted to write about it.”

With help from Lafayette’s Gateway Career Center, he updated his LinkedIn page and began using it to post his articles and photos. It wasn’t long before he developed a loyal following. That’s when his brother stepped in and emailed links of his work to HOT 97 in case they were looking for a writer.

A week later, Delgado flew to New York and met with the head of HOT 97’s film and editing team and director of the digital division. He walked out with the job. It was his 25th birthday.

“There’s no traditional path for a creative,” he says. “You just have to fully commit to yourself.”

As a content producer, Delgado is in an enviable position of selecting what stories and interviews he wants to pursue, as well as conducting video interviews with artists and writing social political commentary through the lens of a song. He recently wrote a review of the Netflix show Seven Seconds and afterward was asked if he wanted to add movies to his repertoire. It didn’t hurt that he studied film theory in college. “It’s coming full circle with my Lafayette degree,” he says.

In May, he was tapped to become the voice of a branded Snapchat account that now has 1.5 million subscribers. He’s also working to help launch the career of Armani White, an aspiring hip-hop artist, who recently performed at Jay-Z’s annual Made in America music festival in Philadelphia.

White is a versatile artist who is on the cusp of making it big, Delgado says. But more important, he has integrity, a quality instilled in Delgado by his parents at an early age.

“I care about two things above all: my family and music,” he says. “I can’t compartmentalize them. I’ve always taken music seriously. It wouldn’t make sense to lower expectations.”